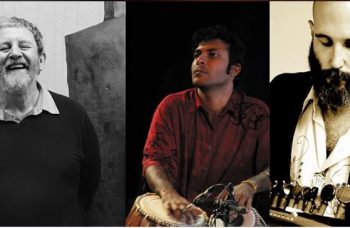 
Samadharshana is an intercultural celebration of the universal nature of creativity and inspiration.
Samadharshana means ‘same sightedness’ or ‘shared vision of the Divine’ in sanskrit.
It will explore the sympathies between Irish Traditional and Indian Classical music with three exceptional artists:

Debojyoti Sanyal is a master musician from Kolkata, West Bengal. He has studied tabla since infancy from his father Amelendu Sanyal and from esteemed virtuoso Pandit Shankar Ghosh. Debojyoti is a well-respected and sought after accompanist for North Indian Classical music. He also has a variety of experience performing with African and Arabic musicians in the South of France where he is based part-time.

Matthew James Noone is a well known Irish based performer of the 25 stringed lute called sarode and has studied North Indian Classical music in Kolkata under Sougata Roy Chowdhury and UK based sarodiya, K Sridhar for almost twenty years. He has performed Indian music across the globe and has collaborated with respected Irish artists such as Martin Hayes, Lisa Hannigan, Liam Ó Maonlai and Sean Mac Erlaine.

Tommy Hayes has performed and recorded with most of the great names in traditional music and beyond. He has been at the forefront of Irish music for over 30 years. He was a founding member of traditional group, Stockton’s Wing and is considered one of the greatest bodhran players on the planet.

Tickets are available here or at the door on the night.